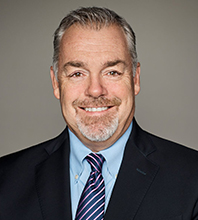 Mike Sullivan is chief sales officer and president of Commercial Markets at Independence Blue Cross (Independence). He joined Independence in 2015, bringing an extensive history of health care experience in both sales and leadership positions to his role with the company.

Mr. Sullivan has overall responsibility for sales and retention across all fully insured and self-funded commercial segments: Large and national employers, consumer, and small- and mid-markets across all of the company’s lines of business. Prior to this role, he served as senior vice president and president of Diversified Business at Independence.

Before joining Independence, Mr. Sullivan was the CEO of HM Insurance Group, CEO of United Concordia, and president of Health Markets at Highmark, Inc.

In addition to his leadership roles, Mr. Sullivan serves on the boards of Visitation BVM and the Pennsylvania Ballet.