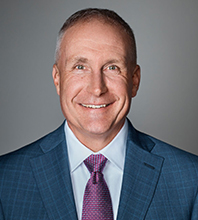 Mr. Kane joined Independence in 2007 as senior director of Underwriting. Prior to joining Independence, Mr. Kane worked in a variety of capacities with other organizations including: operating his own health care-related consulting firm; serving as head of Finance for a $200 million health insurance operation with Horizon Blue Cross Blue Shield of New Jersey; and holding various progressively advancing positions with Prudential Insurance Company of America.

Mr. Kane currently serves as president of the board of the Forum for Ethics in the Workplace, which is administered by DeSales University. He is also on the board of directors for the PA Rivers Chapter of the American Red Cross. Mr. Kane was the president of the Lehigh Valley, Pennsylvania, chapter of the Society of Financial Service Professionals from 2008 to 2012. He was a member of the board of the Lehigh Valley Consortium of Professional Organizations for several years.

Mr. Kane holds a bachelor’s degree in Marketing from King’s College, Wilkes-Barre, Pennsylvania. In addition, he has Chartered Life Underwriter and Charted Financial Consultant designations from the American College in Bryn Mawr, Pennsylvania.

Mr. Kane and his family reside in Bethlehem, Pennsylvania.