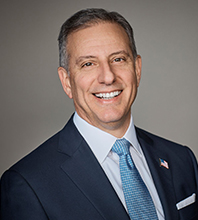 Steve Fera is executive vice president of Public Affairs at Independence Blue Cross (Independence). At Independence, Mr. Fera brings a community-oriented approach to his work at the intersection of health care, public policy, and social impact. Through collaborative partnerships and innovative programs — as well as his leadership of Independence’s $130 million charitable foundation — Mr. Fera works to expand access to care and improve the lives of millions of Americans. During his 30-year career at Independence, he has led multiple lines of business, advised top leaders in government, and championed health equity and public-private collaboration.

Mr. Fera has been recognized for his outstanding service to the community with the Good Scout Award from the Cradle of Liberty Council, Boy Scouts of America. He was named to City & State PA’s 2021 Pennsylvania Healthcare Power 100 list for leading Independence’s government and community affairs and health policy initiatives.

Mr. Fera is also a Fellow with America’s Health Insurance Plans (AHIP) and graduate of its Executive Leadership Program.

He has bachelor of science and master of business administration degrees in finance, both from St. Joseph's University in Philadelphia.