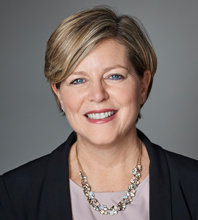 Since November 2020, Kimberly Kockler has served as senior vice president of Government Affairs at Independence Blue Cross (Independence). She leads the company’s state legislative advocacy, helping to develop and advance company positioning on all major health care issues. She is a registered lobbyist and has lobbied in both Harrisburg and Washington, D.C.

Ms. Kockler is a respected and sought-after voice by legislators, administration officials, and health care stakeholders for her expertise and pragmatism that lead to consensus-driven solutions.

Before joining Independence in 2014, Ms. Kockler was vice president of Government Affairs at Blue Cross of Northeastern Pennsylvania. Prior to that, she was the executive director of the Managed Care Association of Pennsylvania and worked as a lobbyist for a private consulting firm.

A Penn State graduate, Ms. Kockler began her career in the state legislature, working as an information specialist and research analyst, first in the Pennsylvania House of Representatives and then in the state Senate.

Ms. Kockler serves on the board of directors of the Pennsylvania Partnerships for Children. She is also a member of Women in Pennsylvania Government Relations. Ms. Kockler and her family resides in Harrisburg.