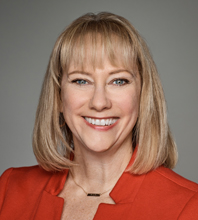 Donna Crilley Farrell is senior vice president of Corporate Communications for Independence Blue Cross (Independence). In this role she oversees communications and brand strategy as well as media and public relations.

Before joining Independence in 2016, Ms. Farrell served as the executive director of the World Meeting of Families — Philadelphia 2015, the global event that brought Pope Francis and visitors from around the world to Philadelphia.

Ms. Farrell began her career as a television reporter and anchor for several stations, including WB17 in Philadelphia. She later served as director of communications for the Archdiocese of Philadelphia.

Ms. Farrell has been recognized as a leader in serving her community, including numerous accolades for leading the World Meeting of Families and representing the City of Philadelphia in the high-caliber international event. She was named “Citizen of the Year” by the Delaware County Chamber of Commerce for bringing tremendous exposure to the region, and she received the papal honor, the Benemerenti Medal, from Pope Francis. She was also awarded the Commodore John Barry award for her contributions to the community and profession; the Good Scout Communications Award from the Cradle of Liberty Council, Boy Scouts of America; and the Public Relations Society of Philadelphia Integrity Award. Ms. Farrell is also a member of the board of directors for Leadership Philadelphia, Philadelphia Convention & Visitors Bureau (PHLCVB), and Cardinal O’Hara High School.

Ms. Farrell earned her undergraduate degree in communications from the University of Pennsylvania. She lives with her family in Springfield, Pennsylvania.