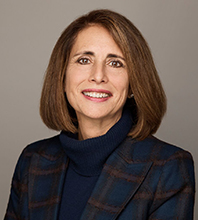 Paula Sunshine is senior vice president and chief marketing executive at Independence Blue Cross. She oversees all commercial and consumer marketing activities, including product development and execution, advertising and creative services, the member experience, and all customer, broker, and member communications. Ms. Sunshine also oversees Independence’s digital assets such as ibx.com and the IBX mobile app.

Since joining Independence in October 2007, Ms. Sunshine has held key roles in marketing, sales, and operations quality assurance — where she began her tenure with the company. In 2010, she transitioned from Operations to Marketing, where she was responsible for building and managing Independence’s Affordable Care Act business line.

Prior to joining Independence, Ms. Sunshine served as senior vice president at MBNA America Bank. Over the course of her 11 years with MBNA, she held positions in several areas, including mergers and acquisitions, marketing, and strategic planning. Prior to MBNA, Ms. Sunshine spent 15 years in the leveraged buyout industry.

Ms. Sunshine earned a bachelor of arts degree in mathematics from Emory University and a master of business administration from the Wharton School at the University of Pennsylvania. She currently serves as an executive sponsor of the Women of Independence, an associate resource group at Independence. Ms. Sunshine also serves on the advisory board of Public Citizens for Children and Youth and the board of Quil, a health care joint venture between Independence and Comcast. In addition, she serves as a member of the Pennsylvania Health Insurance Exchange Authority.