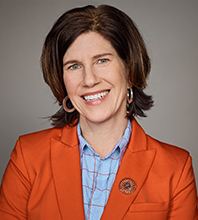 Since joining Independence in 1994, Ms. Klausner has held a variety of roles with increasing responsibility in the Government Markets and Compliance divisions. In 2001, she was named senior director of Corporate Compliance, and in 2010 was appointed vice president of Performance Management and Government Markets.

In 2018, Ms. Klausner testified in front of the U.S. House Committee on Ways and Means regarding the need for Medicare Advantage plans to have flexibility in providing supplemental benefits, such as food to beneficiaries in need, as part of their benefit packages. Some of those recommendations were adopted and Independence has since become a community leader in addressing food insecurity through its plans. During the recent COVID-19 pandemic, under Ms. Klausner’s leadership, more than 1,300 people received a four-week grocery delivery in partnership with a local food delivery service.

Ms. Klausner serves on the board of the Philadelphia Theatre Company. She is also the cochair of the University of Pennsylvania Rowing Sports Board.