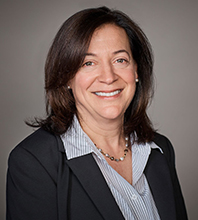 Marcy Rost is executive vice president and chief strategy and communications officer for Independence Health Group (Independence), parent company of Independence Blue Cross. She leads the Division of Corporate Strategy and Communications. In this pivotal role, she advises and supports Independence’s CEO while also providing oversight and leadership on board and external communications as well as corporate business and financial strategy.

Prior to joining Independence Blue Cross in 2012, Ms. Rost held a variety of leadership positions in the government and nonprofit industries.

In government, Ms. Rost served as the executive director of PennPORTS in the administration of Pennsylvania Governor Robert P. Casey, and subsequently served as the director of Corporate Strategy and Planning at the Delaware River Port Authority of Pennsylvania and New Jersey. She has also served as vice president of Operations at Government Solutions, ACS State and Local Solutions, a business group within a Fortune 500 business process outsourcing and technology company. In the nonprofit sector, Ms. Rost served as chief operating officer at Foundations, Inc. and as chief operating officer and chief membership and program officer for the Girl Scouts of Eastern Pennsylvania.

Ms. Rost graduated with a bachelor’s degree from Dickinson College, and earned her master’s degree in government administration from the University of Pennsylvania.